With regards to Amesbury on the river Avon restoration site, the project aimed to change the channel to a more appropriate width, shape and slope, and to re-introduce woody debris, which would result in increased and varied flow speed and sediment movement.

Regarding to Amesbury on the river Avon restoration site, the river channel was reshaped by re-grading part of the existing banks, large woody debris put into the water and a small area of bed raised with gravels.

At Amesbury on the river Avon, whilst flow remains generally slow, the large woody debris has created a more varied habitat. Sedimentation is now more concentrated in the channel edges, with the gravel bed being kept clean, creating fish spawning habitat. Nevertheless, despite observed encouraging signs, the very low gradient and depth of the channel remains a limitation on vegetation growth in the channel 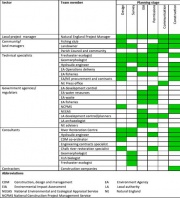