Pressures such as commercial netting, deterioration of water quality, barriers to migration, etc. were inflicted upon the European freshwater ecosystem for many years thus resulting in the decline of the population of Atlantic salmon (Salmo salar). Consequently, the Atlantic salmon specie is now at risk all over Europe even in Scotland where water quality is generally good. Scottish rivers such as the Dee, Tweed, Tay and Spey are actually ranked amongst the most famous salmon fishing rivers in the world. This concern about salmon decline drove the Scottish National Heritage (SNH) to develop a conservation strategy for a sustainable exploitation of salmon stocks. As a result, a LIFE project “Conservation of Atlantic Salmon in Scotland” (CASS) was undertaken in 2004, focusing on eight of the key Salmon River Special Areas of Conservation (SACs) in Scotland (see map below). 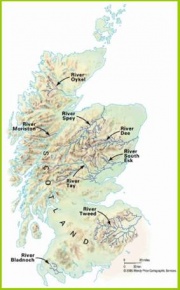 The CASS project aimed to conserve the abundance and diversity of salmon in Scotland through a significant improvement of freshwater habitats, the development of management guidelines, and the promotion and demonstration of best practice in the removal of key threats through joint efforts and partnerships.

In order to achieve the conservation goal, the LIFE project divided its strategy in seven key points focusing on different threats inflicted upon the salmon stock.

A large broad of restoration measures were implemented within the frame of the LIFE CASS project. Those measures are summarized below and relate to the specific goals outlined above.

The project implemented most of the measures foreseen as introduced in the following table. The purchase of netting stations only failed on one river due to a higher price than anticipated. 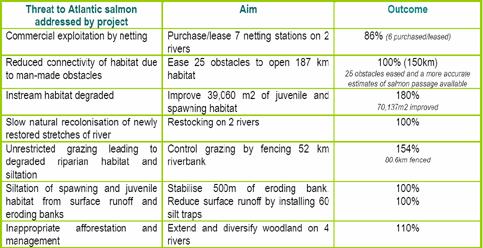 Due to the complex life cycle of Atlantic salmon, it will take several years before it is possible to assess the real conservation impact of the restoration work undertaken under the LIFE CASS project. However, preliminary results of the monitoring show that salmon are returning to these rivers, one of which, the Coy, has not seen salmon for over 250 years. Besides, monitoring results showed new spawning in area of re-created habitats. Details are available here [1].

All the components of the ecosystems (biotic, chemistry and hydromorphologic) were assessed both before and after restoration. Baseline surveys were carried before restoration aiming to set specific project goals and select sites to implement measures through evaluating juvenile salmon densities, invertebrates densities, freshwater pearl mussel densities, etc. as well as estimating areas suitable habitats for spawning and juveniles. Besides, the post-restoration monitoring aimed to assess the success of the restoration measures. Monitoring details are available in the After Life conservation plan [2] and are summarized below:

Monitoring will continue for many years after the project end aiming to determine the success of project actions. The monitoring will also aim to assist with prioritization of future actions, such as further obstacle removal, areas for in-stream restoration above former fish passage obstacles, areas for fencing and grazing management above the former obstacles, areas for forestry or coppicing actions, or riparian vegetation restoration, and so on.

The cooperation succeeded by gathering eight of the Salmon Fisheries Boards, responsible for 40% of the wild salmon resource in Scotland as well as conservation agencies, hydroelectric companies and the Scottish Executive. The LIFE project led to the building of a strong partnership between organizations, which never worked together before, thus generating long term improvements in the management of salmon rivers. All the knowledge gained by the partners during the LIFE CASS project allow them to make appropriate decisions regarding any future work, and may even be used to produce best-practice guidance which could in the future guide legislation and regulation for land practices adjacent to salmon rivers. Nevertheless, although the cooperation was a key success while carrying this project, it turned out to be not as efficient as expected since there were too many partners.

The CASS project team pointed out that the value of positive conservation management is often poorly recognized by river stakeholders. Therefore, project team liaised with anglers, forestry managers, landowners to undertake specific actions, to carry monitoring, etc. during and after the project. As an example, 36 days of partner time spent on direct liaison with stakeholders were organized. The stakeholders were successfully involved in the project such as landowners who requested to be more involved in the fencing and riparian grazing control scheme.

Besides the implementation of the restoration work, the project also foresaw to raise awareness on the needs of salmon conservation, both to river restoration practitioners and to a wider audience.

First of all, the project intended to produce a range of management demonstration products, which would feed into wider conservation strategies for the species, and provide guidance for their application throughout Scotland and beyond. A Scotland wide Best Practice Guidance for gravel extraction in Salmon Rivers was then developed (available here [3]) at a cost of € 13,000. Then, the project developed a specific approach aiming to resolve threats to salmon by holding events such as workshops, conferences etc. to raise awareness of local river rules and policies relating to conservation measures. Finally, an education programme targeting a large public was developed using a website, leaflets, newsletters, interpretative panels, etc. at a total cost of € 140,000. (More details are available here [4]). A particular attention was given to children with the school education programme “Salmon in the classroom” which is still on going. All partners have reported that the Salmon in the Classroom programme has been an effective way to educate the next generation about salmon conservation.

Besides the EU which funded 50 % of the total cost (4 695 816 €), others co-financiers provided essential finance to ensure that the necessary works could be done such as the Scottish Natural Heritage (846 344 €) and some Salmon fisheries boards among the project partners as well as some other co-financiers such as Scottish Executive or Middle Dee Project.

Although the project was completed in 2008, the Scottish salmon conservation is still on-going in order to find out whether the project was a success and to prioritize further actions needed aiming to resolve remaining issues. General information is given below but further details are available in the After Life conservation plan [5]: