In many streams and rivers, channels have been modified and widened for flood control, resulting in relatively uniform cross-sections and low water velocities and depth. As a consequence, water temperature increases during summer if shading is missing, often causing the excessive growth of aquatic vegetation, especially in nutrient rich lowland streams.

The whole channel can be narrowed, if a decrease in discharge capacity and increase in overbank-flooding can be admitted. Alternatively, if discharge capacity can not be markedly reduced, low-flow channels can be built to increase water depth and flow diversity in the given over-widened cross-section. Alternating deflectors (e.g. large wood) or berms (e.g. made of boulders) can be used to create a sinuous thalweg with higher flow velocities and water depth (similar to groynes in larger rivers). In addition, vegetation (aquatic or riparian) can be established on wing deflectors and berms to provide greater habitat diversity and shading.

Actively building a low-flow channel, thereby further increasing discharge capacity, should only be applied in urban settings, where the potential for stream restoration is very limited. If restoration is less limited, a more natural, sinuous and deep low-flow channel can be established by natural channel dynamics. (see fact-sheets “Initiate natural channel dynamics” and “Remeander water course”). Since flow competence is low in over-widened channels, it is necessary to use flow deflectors to initiate morphodynamics.

There is virtually no information on the hydromorphological, physico-chemical or biological effects of narrowing over-widened channels or creating a low-flow channel in peer-reviewed literature. Therefore, the assessment of the expected effect is mainly based on grey literature and expert judgement.

Low-cost efficiency due to the medium to high cost compared to the low ecological effect.

Much higher cost-efficiency if the low-flow channel develops from natural channel dynamics (lower cost and higher ecological effect) and additional measures are applied to enhance bed and bank habitats and to establish riparian vegetation.

Especially in urban streams, uniform low-flow channels have been build in a very technical way with fixed banks and bed (see Figure below for example). These low-flow channels obviously have no ecological effect and never were state-of-the-art. 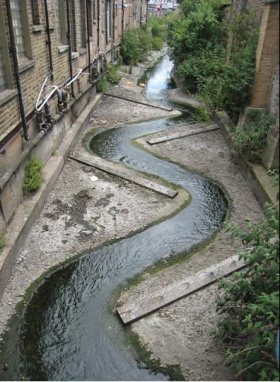