Deva River. Bank protection on the right bank of the Deva River in Molleda

Deva River. Bank protection on the right bank of the Deva River in Molleda

Factsheet: Deva River. Bank protection on the right bank of the Deva River in Molleda

The right bank of this fluvial reach was experiencing intense erosion, which in turn had degraded the existing riparian forest. The presence of meadows has reduced the space of fluvial mobility. The aims of the project were to avoid further erosion of the right bank of the Deva River while promoting the development of the riparian forest.The ideal situation is achieving a continuous riparian forest. the project was designed by the Confederación Hidrográfica del Cantábrico, executed by TRAGSA with the financing of the Spanish Ministry of the Environment.

The Deva is a river in Northern Spain, flowing through the Autonomous Communities of Cantabria and Asturias until it joins the Cares River and flows into the Atlantic Ocean, in the Bay of Biscay, where they form the Tina Mayor estuary which is the natural border between Asturias and Cantabria.[1]. It has a length of 4000 meters and a surface basin of 1100 Km2. The channel width is around 10 meters. The river discharge is around 15,6 m3/s, and the stream power of 458.6 kg m s-3. The substrate consists of sandstone and limestone. The vegetation is composed by a mixed riparian forest (Alnus glutinosa and Salix sp.) and grassland. Among the fish species we can find Salmo salarand Petromyzon marinus.

In order to promote the development of the riparian forest and protect the banks from the water erosion, bioingeneering techniques were chosen. Previously, the banks were reprofiled, lowering their slope, to give them more stability and facilitate the establishment of the vegetation.Below, some images of the Deva River margins before, during and after the implementation of the project.

The right bank before the actions, with problems of erosion 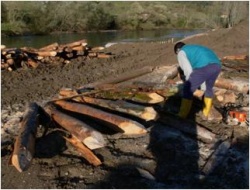 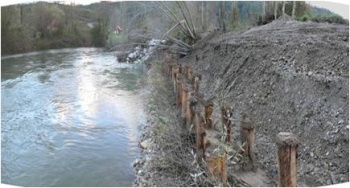 The situation just after the finalisation of the works 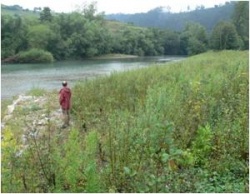 Bank stability and riparian vegetation status were assessed in the first stages of the project design. However no monitoring program was designed or has been implemented.

The total budget was of 186.388,85 €, financed by the Spanish Ministry of the Environment.