As part of the LIFE Nature project “Restoration of the wetland and riparian area at the Upper Drau River” several measures were implemented at the site of Kleblach. Bank stabilization structures were removed and the river bed was widened. Lateral erosion increased the sediment input and initialized the development of gravel / sand bars and islands. Furthermore the river bed incision decreased. One of the former side arms was reconnected to the river for annual flooding, and a second side arm was widened to a width of 30 m, creating diverse instream structures and increasing aquatic habitat diversity.

The Austrian river Drava (in German “Drau”) is part of the Danube catchment. The source of the river is in the Italian municipality Toblach where it continues its flow 264 km along the border between the Central Alps and the Southern Alps and across the Austrian federal states Tyrol and Carinthia. In Osijek (Croatia), the river joins the Danube River after 707 km in total. The site of the restoration project is located near the village of Klebach in Carinthia. At this point the Drava has a discharge basin of roughly 2500 km². The average annual flow of the river near the site is 63m³/s. The river at the site was historically braided with gravel banks in the channel. Until approximately 140 years ago, the Upper Drava was a free flowing, meandering mountain river with numerous braiding stretches due to alluvial cones of the tributaries. In this dynamic river system with its annual floods and high bed load transport, the river course frequently changed. A braiding river - floodplain system with large gravel banks, grey alder, willow wetlands, and wetland meadows characterized the valley.

The Upper Drava is the last free-flowing, not dammed stretch of the river Drava. Nevertheless, human activity has changed the river and its floodplains. The first substantial human changes began with the building of the railroad line through the Upper Drava valley in 1868. In the following years, river-engineering channelized the river in order to reduce flood risk, as well as to expand intensive agricultural land use and settlements. When the river was forced into a single main channel, the river dynamics were restricted and the number of side arms, gravel banks, wetland water bodies, and other natural habitats decreased. Due to the regulation processes and reduced sediment supply by the tributaries caused by torrent control structures, the river bed deepened. This river bed incision resulted in a sinking groundwater level, furthermore agricultural lands and the remaining wetlands went dry. The stability of bank protection structures also suffered from the erosion.

One of the main aims of the LIFE-Nature project "Restoration of the wetland and riparian area at the Upper Drau River" was to remove protection structures from the river banks in order to spaciously extend the river bed. Furthermore, the project consisted of initial plantings of additional floodplain forests, establishment of new water bodies in the floodplains, reintroduction of highly endangered or disappeared plant and animal species, as well as various other protective measures for endangered species.

At the site of Kleblach on a length of 1,3 km bank stabilization structures were removed and the river bed was widened up to 45 m in several sections. A second side arm was created with a length of 500 m and a width of 30 m. These measures aimed the stabilisation of the river bed and the groundwater level, the creation of gravel banks and the increase of instream and bank structures. One of the former side arms was reconnected to the river for annual flooding. This reconnection of floodplain water bodies with the main channel should prevent aggradation processes and provide habitats for juvenile fish and stagnophil fish species. Additionally agricultural land was purchased for the establishment of new floodplain forests. 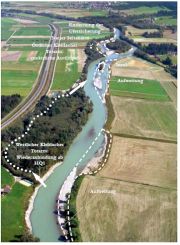 The within the LIFE-Nature project restored river stretches comprise different habitat types according to the EU Habitats Directive (e.g., dynamic gravel banks (3220) and tamarisk and willow pioneer communities (3230, 3240), which will further develop to alluvial forests (91 E0)). These sites provide:

In the framework of the project, an additional 5 hectares of water bodies in the floodplain area were created. These areas connect habitats for amphibians, such as the Italian crested newt (Triturus carnifex) and yellow-bellied toad (Bombina variegata). They provide important habitats for small fish species, such as the Amur bitterling (Rhodeus sericeus) and crucian carp (Carassius carassius) and improve valuable food supply for the white stork (Ciconia ciconia). The European otter (Lutra lutra) re-settled in the region, also benefitting from the LIFE-Nature restoration measures.

Within REFORM WP4, different organism groups were sampled and compared between the restored and a still degraded site upstream (REFORM deliverable D4.3). Fish were sampled in November/December 2011 and riparian as well as floodplain vegetation in summer 2013. The restored and degraded sites were both dominated by rheophilic species. Grayling (Thymallus thymallus) was the main species at the restored site, whereas brown trout (Salmo trutta fario) dominated the degraded site. In the side channel of the restored site rainbow trout (Oncorhynchus mykiss) was caught. The density of small rheophilic fish and the proportion of density of small rheophilic fish were higher at the restored site (REFORM deliverable D4.3)). There was a significant difference in the total number of vegetation units (REFORM deliverable D4.3)) between restored (n=14) and degraded site (n=6). At the restored site, pioneer vegetation units such as Epilobion fleischeri and Salicion elegani were found. Sediment banks were mainly vegetated by german tamarisk (Myricaria germanica), purple willow (Salix purpurea) and olive willow (Salix elaeagnos; see photo below). The degraded site was dominated by the vegetation unit Alno-Padion which is characterized by black alder (Alnus glutinosa) in the tree layer and wood stitchwort (Stellaria nemorum) in the herb layer.

Riparian vegetation at the restored section of the Drava river

The restoration measures which were implemented on the Upper Drava show on the basis of the monitoring results positive morphological developments. In detail the following effects could be observed:

On the site Kleblach the first years (2002-2004) were dominated by high hydromorphological dynamics. Processes like local instream sedimentation of gravel banks, intense bank erosion in the side arm which lead to sediment input, could be monitored. With a mean sedimentation in the main arm of 0,35 m in 2011 a decrease of the river bed erosion could be registered.

Within REFORM WP4 hydromorphological data of this restoration site was investigated in 2012 and compared to a still degraded site upstream (REFORM deliverable D4.3)). The restored site showed a higher variability in macro- and mesohabitats along the measured transects. The dominance of the main channel decreased at the restored site because of the occurance of many other channel features such as secondary channels, side bars or islands (see photo and figure below). The amount of sediment banks and islands were significantly higher at the restored site than at the degraded one. Also at microhabitat level (10 point measurements of depth and flow along the transect) the restored site showed a significantly higher depth variability compared to the degraded site (see figure below).

Before and after the LIFE-Nature project the effects of the realized restoration measures - particularly for EU wide protected species and habitats – were monitored. Representative for the ecosystem Upper Drava the following indicator species and parameter were observed:

In the years 1999-2000 the reference conditions before the restoration measures were assessed. After the termination of the construction works in 2003 the same sites were surveyed again. For the following LIFE project “Life vein – Upper Drau River” (2006-2011) a monitoring on the Upper Drava was implemented as well. In combination with data from river management concepts (since 1991) the results of nearly 20 years allow established analysis and forecasts.

The project was carried out by the Federal Ministry of Agriculture, Forestry, Environment and Water Management in cooperation with the Carinthian State Government.

The cooperation between all involved parties and the communication with the local population and the European Commission worked out well.