The Drau river is the fourth longest tributary of the Donau with a length of 707 km. The source of the river is in the Italian municipality Toblach where it continues its flow through Austria, Slovenia, Croatia and Hungary. The mouth of the river in the Donau is near the city of Osijek.

The Upper Drau in Austria is an European protected area with the largest grey alder riparian forests of Austria and over 140 species of birds, including 51 red-listed species. The LIFE project ‘Life vein – Upper Drau River’ was carried out to counteract the trend of too narrow channels that are vulnerable for erosion and flooding by widening the river. Location Amlach/St. Peter is close to the village of Unteramlach and St. Peter, downstream of Spittal an der Drau.

The Upper Drau is the last free-flowing, not dammed stretch of the river Drau. Nevertheless, human activity has changed the river and its floodplains. When a rail road line was build through the valley in 1870, regulatory procedures were carried out in order to reduce the flood danger and to expand intensive agricultural lands and settlements. The embankments created a narrow channel which suffered from bed erosion. The river bed deepened and wetlands and agricultural lands went dry with the sinking groundwater level. The stability of bank protection structures also suffered from the erosion.

The project has 4 global objectives

No specific objectives could be found in the available project documents

No success criteria could be found in the available project documents 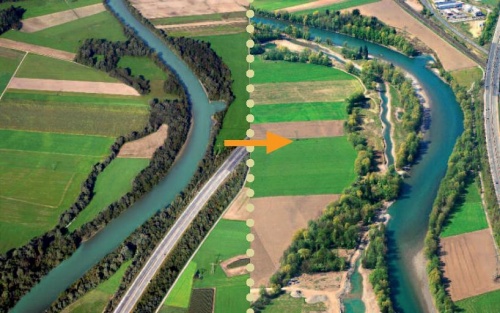 In Amlach/St. Peter, the river bed was widened with 20 meters by moving 60,000 cubic meters of soil and gravel. New wetlands and water bodies were constructed, as well as a new side channel.

A pre-restoration monitoring scheme was carried out to assess the current state of the location. The monitoring focuses on:

It was expected that the new, large side channel would create a valuable sanctuary for many types of fish and amphibians. Two hectares of floodplain forest is expected to develop in the coming decades.

Ecology The synopsis of the monitoring carried out in 2010 and 2011 do not show the monitoring results for the location Amlach/St. Peter for fish. The results of the monitoring for the combined projects of the LIFE project and the older GBK Obere Drau project show that the Grayling (Thymallus thymallus) has increased considerably with a doubling of the caught biomass, but it is still below the values measured in the end of the 1980s. Two species that show no improvement are the Danube salmon (Hucho hucho), which is close to complete extinction in the Upper Drava and self-sustaining reproduction could not be determined. The presence of common nase (Chondrostoma nasus) could only be determined by few individuals, but the population has not improved.

Also for macro-invertebrates no results for the individual project Amlach/St. Peter were presented in the synopsis, but for all the projects 5 new species of spider and 8 species of carabid beetles were found of the total 130 species. Overall, the species richness of spiders and carabid beetles with specialized floodplain species returns.

The number of amphibian species rapidly increased from 1 to 6 species.

A short period after the river widening in Amlach/St. Peter was completed, hydro-morphological processes affected the system strongly. The river bed responded to the discharge relief of the side channel with large sedimentation of 15 cm. The side channel was widened due to bank erosion to 7 meters and in the upstream part shows many sand and gravel banks.

The project was carried out by the Federal Ministry of Agriculture, Forestry, Environment and Water Management in cooperation with the Carinthian State Government and Torrent and avalanche control, section Carinthia.

The main stakeholders were the land owners of the agricultural lands bordering the Drau river.