River regulation imposes fundamental changes on flow and sediment transfer, which are the principal controls on fluvial morphodynamics (Church, 1995).

In order to significantly modify the natural flow regime, a major artificial water store, in the form of a reservoir, or a major water transfer scheme from another watershed is usually needed, although groundwater resources are sometimes used to augment or regulate river flow regimes to match water demand (e.g. Cowx, 2000). The impacts caused by dams and reservoirs in rivers is a problem of global nature that affects the major rivers around the world (Petts, 1984; Dynesius & Nilsson, 1994; Jalon Garcia et al., 1992, Nilsson & Berggren, 2000; etc.).

The hydrological changes produced by this type of regulation are strongly influenced by its purpose: flood control, hydropower, water supply and irrigation (Ward & Stanford, 1979, Petts, 1984). Each type of water use produces a different type of regulated flow regime that results in different ecological alterations, and often the same reservoir is operated for multiple purposes. For example, reservoirs for irrigation are operated to store water during humid seasons and to release it during dry seasons, usually producing a regime of more seasonally constant flows. Reservoirs designed for irrigation, domestic or industrial water supply and hydropower generation all tend to attenuate and delay the seasonal regime of flows to the downstream water body. Vörösmarty et al. (1997) estimated that in the mid 1980s the maximum water storage of the 746 World’s largest dams was equivalent to 20% of global mean annual runoff and the median water residence time in these impoundments was 0.40 years.

Regarding irrigation reservoirs in Mediterranean rivers, first there is the very significant transformation of the natural flow regime into a regulated regime in opposed phase: minimum monthly flows that naturally occur in summer, are increased into maximum ones due to the demand for water for irrigation, while the minimum flows occur in the winter months. colder and more precipitation, which tries to fill the reservoirs (see Figure 1). 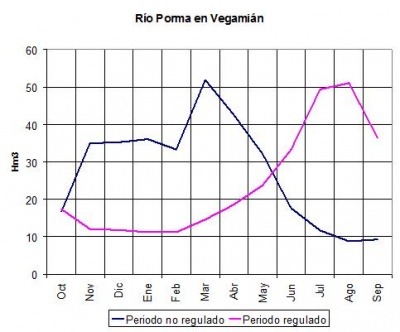 With the filling of reservoirs during the months of rain (winter) are eliminated or ordinary floods of higher frequency, which are of great importance in maintaining the natural channel morphology and the renovation of habitat and regeneration of the riparian vegetation, and generating a flow regime much more uniform in time, where only keep the avenues overtime (Figure 2).

The transformation of the natural flow generated from the regulation for irrigation depends on the location on the river network of the stretch of river in question. It can only mean a change of the times in which they occur peak flows, or also include a drastic reduction of water flowing through the channels with respect to the contribution natural, downstream from the derivations of water for use in agriculture.

Figure 2.- River Aragon flow regime, downstream of the dam of Yesa. Since 1970 at which the regulation for irrigation significantly reduces the frequency of regular floods, between 100 and 200 m3/s, and increases the length of minimum flows, so will these impacts over time.

The regulation of the flow affects very significantly to the physical habitat of the rivers where they live aquatic communities of plants and animals, or those associated with moisture inland. The affections to the aquatic habitat may refer to the emergence of hydraulic conditions relating to the depth of the water, speed of current, shear stress,.., unsuitable for native species and may affect a mismatch of spawning for fish reproduction, lack of deep areas of refuge for individuals larger, and so on. They can also alter the physical and chemical characteristics of water, with reduced forms of dissolved salts, problems of dissolved oxygen content, or altering the temperature regime in connection with fund outflows of reservoirs, with summer temperatures in much colder that the air which impacts on the development of biological cycles of aquatic insects.

In the stretches of rivers are also regulated extensions or modify the surface useful for each species, to vary the area of film and the distribution of water depths in each section of the channel depending on the flow circulating. It also changes the size and arrangement of sediment to the bed and banks; when traveling on a prolonged the minimum flows (during autumn and winter) is the siltation of the bed by accumulation of thin, with a seal of microhabitats, while when traveling on a continuous peak flows (months irrigation) increases the drag forces on the bed, causing instability in the macro, and how the banks are a size too thick to retain moisture and germination and growth of seeds.

Dams are barriers that inhibit fish migrations, but their effect on the river continuum is much more important because affects all its components though the fragmentation of all the fluvial network (Dynesius & Nilsson, 1994).

Some of these effects result immediate from the starting of the reservoir regulation and others show a delay in their appearance, especially the changes in the composition and structure of communities biological. In general, new water controlled conditions are less favorable to native species adapted to a natural with Mediterranean avenues regular season marked a certain magnitude and in the warmer months, and more favorable for exotic species from other regions They can be more competitive than the first in the schemes covered more uniform, similar to those of the rivers of origin.

This irrigation regulation produces impacts that affect in more or less degree the aquatic system and the dependant environments. Changes in the river flows (in terms of quantity, timing, and frequency) can lead directly to biologic and geomorphic changes, and geomorphic changes lead indirectly to ecological adjustments (Whiting, 2002), altering ecosystem stability in terms of resistance and resilience (Connel & Wayne, 1983). As some authors have mentioned, under regulated conditions Mediterranean stream species cannot compete successfully with many introduced (generalist and limnethic) species (García de Jalón et al., 1992; Morillo et al., 2002), diminishing the ability of aquatic systems to maintain a balanced, integrated, and adaptable community of autochthonous organisms.

The effects of regulating the flow into the fish species have been studied in depth in Spain and are well documented in different jobs (Elvira, 1995; Elvira and Almodovar, 2001, etc.). It is clear that the maintenance of regulated flow regimes, with neither annual or interannual fluctuations, including bankfull discharges floods for natural regeneration of the river habitat, has created a different fluvial habitat that has favor a strong invasion of mediterranean rivers for many species, both fish (e.g., catfish, sun-fish, carp, pike, salmon of the Danube, etc.). as other animal species (e.g., zebra mussel) or aquatic plants (e.g. water hyacinth).

Mediterranean streams have natural regimes with an important torrential component that is reflected in strong seasonal and interannual fluctuations. At evolutionary scale, the geological and biogeographical history of these rivers (together with these particular hydrological features), has produced a large number of endemic species since many fluvial basins have remained isolated for a long time. As a consequence, the degree of endemicism of primary and secondary freshwater fishes in Spain is remarkable (Elvira, 1995). These species are not adapted to the new habitats and cannot compite successfully with introduced ones.

Effect/Impact on (including literature citations)

The implementation of river impoundments and inter-basin transfers may increase or decrease flows, but they also have aggregate effects on other properties of the flow regime, including flow variability and timing. Magilligan and Nislow (2004) reviewed pre- and post-dam hydrological changes downstream of dams that covered the spectrum of hydrological and climatic regimes across the United States. In general, the most significant changes occurred in minimum and maximum flows of different duration. The 1-day through 90-day minimum flows increased significantly and the 1-day through 7-day maximum flows decreased significantly following impoundment. Other significant adjustments across the majority of sites following impoundment included: an increase in the number of hydrograph reversals; an increase in the number of flow pulses but a decrease in their duration; and a decrease in the mean rate of hydrograph rise and fall. At a basin scale, Batalla et al. (2004) showed that the presence of 187 large dams in the Ebro basin, with a total capacity equivalent to 57% of the total mean annual runoff, reduced flood magnitude, with Q 2 and Q 10 reduced over 30% on average, particularly in rivers with higher values of the impounded runoff index, (i.e., reservoir capacity divided by mean annual runoff). Also, they found that the variability of mean daily flows was reduced in most cases due to storing of winter floods and increased baseflows in summer for irrigation. The important role of physical stability, defined in relation to hydrological (frequency, duration and timing of inundation) and channel parameters (channel dynamics, bedform and sediment size) on fluvial ecosystems was emphasized by Petts (2000). Thus, regulated flows disturb the bedform, surface-water and groundwater interactions and the channel form dynamics and associated changing hydraulic conditions that alter both benthic and riparian community patterns. Decreased flow dynamics can reduce vertical hydrological connectivity by reducing hydraulic gradients (Kondolf et al. 2006). Flood peaks are typically reduced by river regulation, which reduces the frequency and extent of floodplain inundation and flow through side channels (Gergel et al. 2002, and Henry et al. 2002). The reduction in channel-forming flows reduces channel migration, an important phenomenon in maintaining high levels of habitat diversity across floodplains (Ward & Stanford, 2006): the rich mosaic of habitat patches across the floodplain due to a wide range of successional stages is transformed into an uniform mature riparian forest. Hydrological connectivity with the remaining floodplain geomorphic features is also reduced, as illustrated by flow regulation on the lower Macintyre River, Australia. Here flow regulation has limited exchanges between the river and its floodplain, (Walker & Thoms 1993), including a reduction in the frequency of hydrological connections to a series of anabranch channels by up to 22% (Thoms et al 2005); induced a stepped profile in the main channel; and changed the nature of the littoral zone, creating an environment inimical to many native species, notably fish (Walker & Thoms 1993). Flushing flows are often employed in an attempt to impede or reverse some of these effects. Such flows are particularly effective in removing fine particulate materials and chemicals that may have accumulated under supressed flow conditions. For example, flushing flows from Beervlei Dam on the Groot River were effective in removing accumulated salts from riverine pools. The flushing flows were followed by reduced flows which initiated spawning of the potamodromous minnow species in the riffle areas (Cambray 2006).

Case studies where this pressure is present

Cowx, I. 2000. Potential impact of groundwater augmentation of river flows on fisheries: a case study from the River Ouse, Yorkshire, UK. Fisheries Management and Ecology 7: 85-96.

Vörösmarty, C.J.,Fekete, B., Sharma, K. 1997. The potential impact of neo-Castorization on sediment transport by the global network of rivers. Procs. Human impact on erosion and sedimentation 261.