Many streams, especially in the lowland regions, are located in agricultural areas. Due to the lack of riparian forests and shading as well as high nutrient inputs, excessive growth of aquatic vegetation (macrophytes) is common. Maintenance of these streams usually includes the mechanical removal of aquatic vegetation several times per year to ensure the efficient drainage of agricultural areas, reduce sedimentation and flooding risks.

This management practice favours macrophyte species able to cope with a high level of physical disturbance while intolerant species become rare or disappear (homogenization of macrophyte communities), and frequent cuttings decrease macrophyte diversity (Baatrup-Pedersen and Riis 2004). Moreover, fish and invertebrates are affected by weed cutting since macrophytes are important habitats in lowland streams, cutting increases animal drift (Statzner and Stechmann, 1977, Kern-Hansen, 1978, Meyer, 1987), and a large number of animals are removed with the cut plants (Pearson and Jones, 1978, Dawson et al., 1991).

To mitigate the negative effects of dredging or weed cutting, several guidelines recommend to leave some macrophytes, either on one or both sides of the channel or as alternating patches that induce a sinuous flow pattern (e.g. DWA 2010) and to cut the weeds in summer rather than in spring. 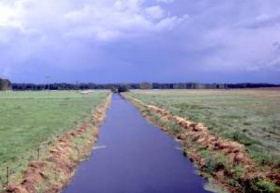 Modifying aquatic vegetation maintenance is a mitigation measure to reduce the impact of dredging and weed cutting on stream biota.

It should be applied in lowland streams in agricultural areas only where the options for stream restoration is limited. Preferably, riparian forested buffer strips should be restored to provide more ecological benefits (e.g. shading, input of organic material like leaves and large wood) and to develop more natural habitat conditions (given that the streams are naturally bordered by riparian forests).

High cost-efficiency since it is a low-cost mitigation measure with a medium to high ecological effect.

Mortenson, E. (1977) Density-dependant mortality of trout fry Salmo trutta L. and its relationship to the management of small streams. Journal of Fish Biology, 11, 613-617.

Pearson, R.G. & Jones, N.V. (1978) The effects of weed-cutting on the macroinvertebrate fauna of a canalised section of the river Hull, a northern English chalk stream. Environmental Management, 7, 91–97.