In-stream sediment mining (referred to as dredging in the following) directly alters the channel geometry and bed elevation at the mining site. Moreover, it causes a sediment deficit and typically induces upstream- and downstream-progressing river incision (Fig. 1).

This incision, in turn, induces higher average shear stresses on the bed under the same flows and, therefore, may aggravate the process of degradation (Martin-Vide et al. 2010). The resultant incision alters the frequency of floodplain inundation along the river courses, lowers valley- floor water tables and frequently leads to destruction of bridges and other infrastructure works. Moreover, mining causes lateral channel instability, bed armouring or even changes of the channel planform and type (from braiding to single-channel or from gravel-bed to bedrock river types).

As a consequence, mining results in the loss or impoverishment of aquatic and riparian habitats. 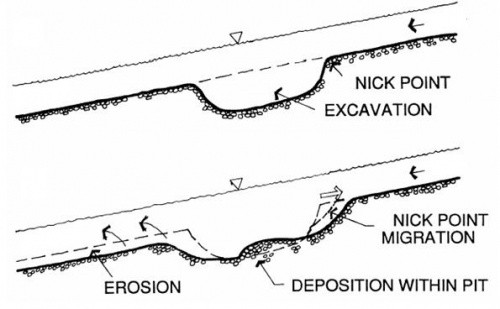 The type and magnitude of channel response to sediment mining depend mainly on the ratio between extraction and sediment replenishment rates. The effects of mining will be especially severe and difficult to reverse:

(i) where material is extracted at a rate greatly exceeding the replenishment rate;

(ii) in single-thread rivers, that are generally associated with relatively low rates of catchment sediment supply;

(iv) where rivers are underlain by a thin cover of alluvium over bedrock; and

Due to these detrimental effects and based on the above considerations, sediment mining must not be allowed in incised, incising or vertically stable rivers.

In aggrading rivers, sediment mining can be considered at locations where it may have beneficial effects for flood-control purposes, channel stability and restoration, though an accurate geomorphic study on the following aspects is mandatory: trends of channel adjustments, sources of sediments in the basin and along the river, modes and times of sediment transfer through the fluvial system, and the effect of natural (e.g. lakes) or artificial features (e.g. dams, weirs) altering sediment fluxes through the system. Based on these information, it can be assessed if the river is aggrading and sediment production in the drainage basin is high and sediments are frequently delivered to the river (Rinaldi et al. 2005).

Field experiments indicate that infrequent mining of small amounts of gravel in near-natural rivers with high sediment supply probably do not cause significant adverse effects on fish and invertebrate communities on the reach scale, obviously since substrate composition and bar topography recover quickly and due to the high re-colonization potential (one-time removal of 69,000 m3 of gravel in a large river, 232,000 km2, i.e. about 30% of the annual sediment load, Rempel and Church 2009). However, there are no further empirical data to derive recommendations for the amount of gravel which could be dredged and frequency or timing of dredging without causing a significant ecological impact, especially in less natural rivers.

There are several publications on the effect of dredging on physical habitat characteristics (see review in Rinaldi et al. 2005), only few studies on the biological effect (e.g. Brown et al. 1998), and virtually no information on the physical or biological effect of reducing dredging activities as a restoration measure in peer-reviewed literature (except Rempel and Church 2009). Therefore, the assessment of the expected effect of reducing dredging activities is mainly based on expert judgement.

Due to missing information on the economic value of gravel mining and the ecological effect, cost-efficiency can not be assessed.

Instream mining is prohibited in several European countries (among others): United Kingdom, Germany, France, The Netherlands, and Switzerland. It has been reduced or prohibited in: Italy, Portugal. (Kondolf 1997).