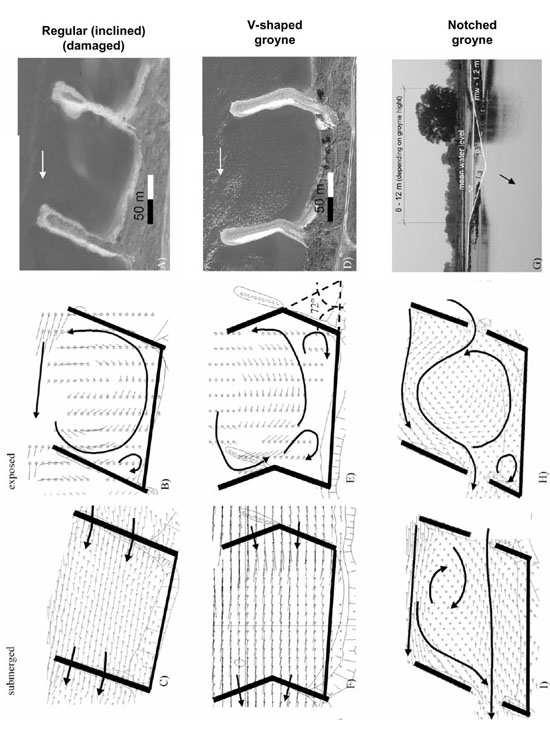 In-channel hydraulic structures like groynes and deflectors are used in river engineering to stabilize banks and to concentrate the flow in the middle of the channel to achieve a sufficient fairway depth at medium and low discharges, resulting in a fixed river planform, a navigation channel that is relatively deep over a large part of its cross-section, and sedimentation between the groynes (groyne fields). In waterways, groyne fields are often the only shallow, low-velocity areas with some flow- and substrate diversity (although often impacted by ship-induced waves).

By removing or modifying in-channel hydraulic structures like groynes, flow- and substrate diversity can be further increased and aquatic and semi-terrestrial habitats can be improved. Different types of groynes have been used: V-shaped and notched groynes (see Figure 1) and L-shaped groynes.

Regular inclined groynes deflect the water away from the river bank when submerged. V-shaped groynes also deflect the water away from the river bank, but in addition direct the current to the middle of the downstream groyne field, resuspending fine material which has deposited during low-flow periods. In contrast to one large eddy in regular groyne fields, flow-diversity is higher during low- and mean-flow periods. Notched groynes result in a second flow profile near the river bank at high flows and a more diverse flow-pattern during low- and mean-flows (Kleinwächter et al. 2005). Another groyne type are L-shaped groynes, where an additional parallel structure is build at the head of the inclined groyne parallel to the flow to protect the groyne field from ship-induced waves.

The fine sediment deposition in the groyne fields often are contaminated with pollutants or nutrients (Schwartz and Kozerski 2003). Removing or modifying groynes may remobilize these sediments and affect downstream river reaches. Therefore, from an ecological point of view, it is desirable that the organic mud should be removed from the river and deposited in a controlled landfill prior to removing or modifying groynes (see fact-sheet “Remove Sediments”).

The number and shape of gyres developing in groyne fields mainly depends on the ratio between the groyne length (Lg) and the length of the groyne field (Lf). A two-gyre circulation pattern develops when aspect ratio is less than a critical value (Lg/Lf < 0.5), and a one-gyre circulation for the groyne fields with greater than critical aspect ratios (Lg/Lf > 0.5). This is of ecological interest since the sedimentation pattern in the groyne fields corresponds to the patterns of recirculating flow. The low velocity area in the centre of gyres promotes accumulation of relatively fine sediments. The thickness of the layer of deposited fines decreases toward the gyre margins (Sukhodolov et al. 2002).

Another modification of groynes concerns the material of which the groyne has been constructed. Especially in lowland rivers groynes were found to substitute former gravel bars to a certain degree and to provide spawning and nursing habitats for lithophilic fish (Bischoff & Wolter 2001). However, it is quite important to cover the groyne heads with differently sized gravel instead of concrete or similarly impermeable embankments.