Tajo. Improvement of ecological state of the Tajo and tributaries riverside affected by the spill of kaolin, at Poveda de la Sierra and Taravilla (Guadalajara)

Tajo. Improvement of ecological state of the Tajo and tributaries riverside affected by the spill of kaolin, at Poveda de la Sierra and Taravilla (Guadalajara)

Factsheet: Tajo. Improvement of ecological state of the Tajo and tributaries riverside affected by the spill of kaolin, at Poveda de la Sierra and Taravilla (Guadalajara) 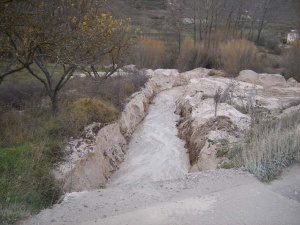 High turbidity of the water, due to the input of suspended matter. 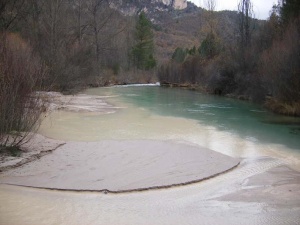 Sedimentation at the pools.

The Alto Tajo is characterised by a network of canyons, gorges, terraces, and singular landscape shapes. This is the largest gorges system of the region, with great diversity (geologic, climatic and topograhic)and in an excellent state of preservation. this variety of environments provides a high diversity oh habitats for wildlife. Among birds of prey include: vultures, kestrels and hawks, followed by hawks, eagles and peregrine falcons.among the mammals we find: wild cats, spears, otters, polecats and weasels. Of the small mammals are the most abundant rodents: voles, house mice, dormice, squirrels, followed by insectivores. Also remarkable is the presence of 15 species of reptiles, among them the common gecko, lizards, snakes, "lagarto ocelado" and snub-nosed viper, nine kinds of amphibians and seven native species of fish.


the vegetation of the watershed is characterised by extensive pine stands, composed of different pine species (Pynus sylvestris, Pinus nigra and Pinus Pinaster. The woods of pines are found mainly at the hillside valleys and higher elevations. Under the cover of the pine trees are oaks, holm oak and downy oak. In the center of the Alto Tajo Natural Park, at the limestone moors, are juniper forests.


The riparian forest consists of black and trembling aspen, willow, elm, linden, hazel, privet and birch among other species.

In the park there are many species that found in salt marshes, bogs, ponds and lagoons, rocky, narrow gorge, their last refuge. Examples include the Atropa baetica and Delphinium fissum subsp. sordium, the last one classified as an endangered species.

The main objective of the project is to improve the availability of habitats and recovery the fish populations. So, the principal measures are directed to improve the quality of the water, improve the structure and substrate of the channel and recover the longitudinal connectivity of the river. 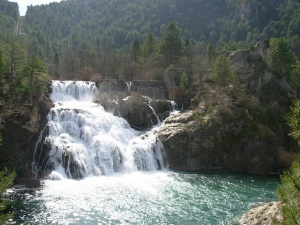 Other measures were used to improve the structure and composition of the vegetation: clearing, pruning, plantations and sowing. This allows for improve sanitary conditions, encouraging self-development of the riparian ecosystem, which also helps to reduce sediment input.

The Alto Tajo Plan for Natural Resource Management considers the mining of kaolin as a risk factor for the natural preservation of this place, and gives it an impact on the geomorphology of "significant effects, very significant and probably irreversible". At the same time, the PNRM recognizes that the mining sector generates 13,5% of jobs in the area ( From the 4996 inhabitants registered among the 38 affected municipalities, there are just 1387 people registered as working population, with 185 direct jobs in mining, plus 50 drivers of trucks used to transport kaolin and nearly 400 indirect jobs). This activity is the second in importance for the economy of the area after the cattle farming, agriculture and forestry.[1]
The restoration project belongs to the PlanE (Spanish Plan for Stimulate the Economy and Employement) and plans to create 24 jobs.[2]

The kaolin mining at the Alto Tajo started in the 1960´s. The kaolin comes from the decomposition of feldspar rocks and is used as raw material in many industries: paper, ceramics, glass plates, paints, plastics, pharmaceuticals , cosmetics, construction, electrical equipment, metals, chemical ... and well over 100 applications. There is a kaolin crude that is extracted directly from the mine (a mixture of kaolin, sands and gravels), and washed kaolin, which undergoes a transformation process and has lower concentrations of sand and feldspar.
The largest producer of kaolin in Spain is Ecesa (Grupo Explotaciones Cerámicas Españolas), which currently operates the mine "Nuria" (30.000 tons per year) in Poveda de la Sierra, the only one in Spain that produces kaolin coating. Actually operates with 26 workers. The other major mine in Poveda is "María José", operated by Caobar S.A., which employs 115 people directly, the production of sand and kaolin reaches 300.000 tons per year.
Almost all the mines are located at hillsides, with a small basin devoid of vegetation.Their capacity to accumulate water is reduced, enabling the arrive of sediments to the river network, even if their location is at the surroundings of the Natural Park, not inside its boundaries.
The active mines present emission rates similar to the natural rate(i.e. that coming from natural gullies), except when the decantation ponds are not functioning properly, or in erodible areas which drain directly to the streams. Additionally, the decrease of the river flow in recent years (due to climatic conditions and land use changes)has to be considered, as the high flows contribute to "clean" the kaolin from the riverbed.
The main problem is found at the inactive mines, like the Santa Engracia mine in Peñalén, abandoned 20 years ago. The environmental restoration of inactive mines has been succesful in other areas, like Andorra or Utrillas. At the Alto Tajo, Caobar S.A. has started to integrate at the exploitation "El Machorro" the principles for ecological restoration of inactive mines. They are testing the response of different eco-hydrological restoration solutions in a experimental dump. The Ministry of Environment created in 2005 a project for management and research in ecoogical restoration of inactive mines. the working group consists of the authority responsible of mining, the Confederación Hidrográfica del Tajo, the affected muncipalities and researchers from three universities in Spain.
The REMEDINAL research group, formed of geomorphologists and ecologists from the Universidad Complutense de Madrid and the Universidad de Alcalá de Henares[3] [4]has the following objectives:

Since 2008, the NGO AEMS, Ríos con Vida is developing a volunteer project funded by the River Volunteer and Environmental Education Program of the Ministry of Environment.The actions carried out involve raking and cleaning of river beds, monitoring and educational sampling of aquatic bioindicators. The results have been satisfactory until now[5][6].